Two years ago on Christmas morning I woke up really early with an horrible pain in my breast. It was all bright red and warm and hurt every time I moved. It was a breast infection! So as soon as the urgent care opened we went to get antibiotics. Keilei was only two weeks old and no one had ever told me that you could get infections. I was not a big fan. It was not fun, especially on Christmas.
On Christmas eve eve this year Sean commented that he was glad I didn't have breast infection cause he didn't want to spend Christmas morning in an urgent care again. I couldn't agree more.
On Christmas morning I woke up early again cause I was uncomfortable in my chest. I thought it was just because I was full and I just needed to pump. But come to find out I was all red again and still hurt after pumping. Yep I had another breast infection...on Christmas morning!!! What are the odds seriously!
But being in Logan the urgent care wasn't open and neither was any pharmacy. Not a single one not even in the hospital, so even though I got a hold of a doctor and he had a prescription for me I couldn't fill it! I could only get meds if I went into the ER and I was not about to go into the ER for an infection and on Christmas! So we where stumped until Sean, being as smart as he is, come up with the idea of calling it in to a pharmacy in Bountiful. We where going to look at the temple lights in SLC that night and we could just stop and pick it up. So I called around and found a pharmacy that was open and then called the doctor to have him call it in there.
Luckily this infection didn't hurt near as bad as that first one I got so I was still able to enjoy the whole day.
All the phone calls took up the first of the morning and we where just getting started opening our presents when my family called and asked if we where on our way over. Sean wanted to do our Christmas first so I asked them to wait for a half an hour and then we would be over. It ended up being an hour but we had a good time watching Keilei open all of her MANY presents. She had a blast. I sat and held Rush while Sean helped her open presents.
She got way to many presents.. ones from us, her cousins, and grandma's 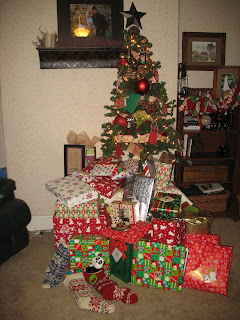 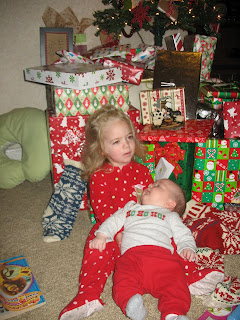 She didn't want to hold the baby, she kept saying "No Baby, No Baby"
I just noticed he looks almost as big as her and he is only 6 weeks old 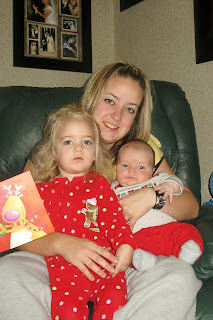 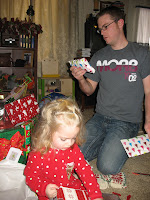 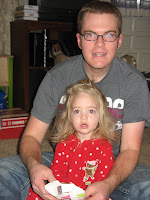 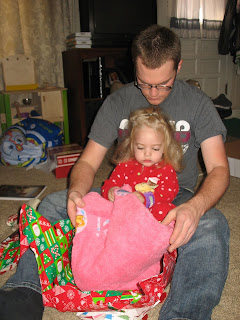 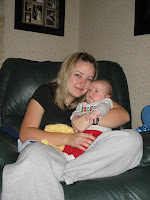 Rush & I watching them open presents 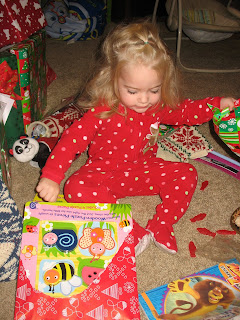 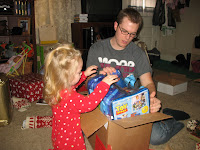 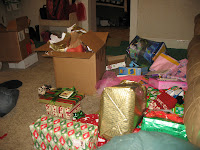 I'm sorry to hear about your infection! I haven't experienced one yet, but I've heard they can be quite painful. I'm glad you were able to get some medicine to help and that you Christmas was enjoyable:)